Traversing the Avalanche - A look at the Author, Carl Bates - The Finance Team
Call us on  0861 007 917  info@thefinanceteam.co.za 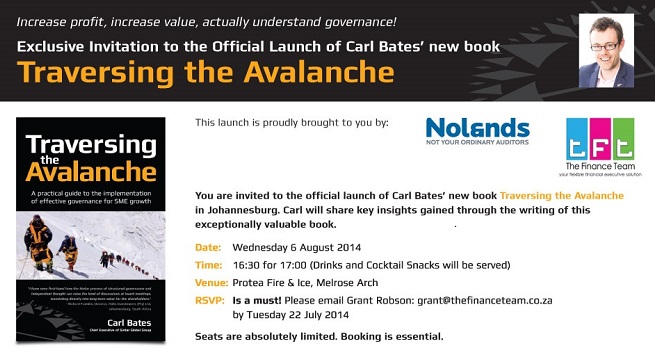 Following our blog last week about the up-coming book launch of Traversing the Avalanche, we had a couple of emails asking about the author. If you have not heard of Carl Bates, he is someone you should know! Here is a little about the author:

Carl Bates is a global entrepreneur, speaker, author, mentor, director and dynamic thought leader from New Zealand. He is considered to be an international expert on business growth and the education and implementation of governance for SMEs and privately-held companies. Carl is passionate about the role of governance in supporting SMEs and privately-held companies to grow and contribute significantly to their country’s economy. He focuses on ensuring that shareholder-managers understand that the role of governance is both a performance enhancement and a conformance tool, which is only as effective as its implementation is successful. Through this understanding, companies can implement enterprise governance in a way that maximises its value contribution.

Carl is an experienced chairman and independent director with great insight into the operation of companies and how they can create long-term value for shareholders and other stakeholders, effectively deliver for clients, as well as inspire their teams. He has been an independent director for over 13 years and has taught SMEs and directors the world over, what governance really means. Carl is globally recognised for his practical understanding of governance and is constantly sharing his knowledge on the subject.

At the age of 18, Carl was appointed as a director of the Brightwater Centre, a specialised aged-care facility in Palmerston North, New Zealand. Two years later he was appointed as a director of the Arena Manawatu, New Zealand’s largest multi-stadia complex, also becoming chairman of the finance and audit committee. During this time he was also a council member of the Universal College of Learning (UCOL) and has since been a director of various other private companies.

In his early twenties, as acting chief executive of Quality Health New Zealand, the country’s leading standards setting and performance assessment agency for health and disability services, Carl led the organisation through a turbulent time and positioned it strongly for the future. This exposed him to the role and responsibility of management and gave him the opportunity to experience reporting directly to a board.

Today, Carl is the chief executive of the Sirdar Global Group. He is currently based in South Africa, where he works with Sirdar Global’s South African subsidiary and is leading the expansion of Sirdar into other countries in Africa and beyond. As a chairman and director of several of Sirdar’s client companies, Carl is continually involved in the governance of SMEs and privately-held companies while leading the Sirdar organisation and championing its unique methodology.

traversing the avalanche
Why a cash flow forecast is the lifeblood of your business
Best practice for setting up your business plan structure
© 2022 The Finance Team Group (Pty) Ltd. All Rights Reserved.
× How can I help you?