Lessons learned from Dominos’ turnaround strategy
Call us on  0861 007 917  info@thefinanceteam.co.za 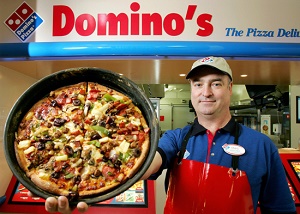 Like many South Africans, you might have noticed with some excitement a new pizza joint being opened at a store near you. It bore the red, white and blue logo of the internationally established pizza brand, Domino’s. Those who love a traditionally American pizza would have joined the long queues and savoured the cornstarch-covered base, the stringy cheese and the salty pepperoni. You might have thrilled at the store’s innovative take-away order management system, which features your name on a digital screen with a status update as to where your pizza is in the preparation process.

You would have been enjoying your Domino’s pizza at one of 1800 new international stores that have been opened by the company in the past four years. Growth at Domino’s is significant and profits are soaring at around 16%. But a few years ago, the pizza take-out company was battling to pull ahead from its competitors, Pizza Hut and Papa Johns. Its newfound growth is what Business Insider describes as an “epic turnaround”. Let’s look at a few of the “take-aways” we can glean from Domino’s turnaround strategy.

During its struggling years, Domino’s conducted extensive market research to find out what customers thought of its products. The answer wasn’t a welcome one: consumers said they simply didn’t like the taste of Domino’s pizza. Instead of shying away from this information, or trying to downplay it to the public, Domino’s faced it head on. They ran a series of adverts admitting that people didn’t think much of their pizza – one advert even had a focus group saying it “tastes like cardboard”. They used this to springboard a new recipe for their pizza, and then ran a campaign with the line: “Did we actually face our critics and reinvent our pizza from the crust up? Oh Yes We Did.”

The lesson: Your company’s toughest times represent the most important time to seek constructive criticism – and act on it. In fact, criticism of any kind can and should be harnessed and used for good.

Domino’s has expanded their menu and revved up their sandwiches, pastas and side dishes. A popular new offering on the American menu are “specialty chicken strips” which are covered in cheese and come with dips. These, according to the company’s CEO Patrick Doyle, are driving up the average amount spent by each customer.

The lesson: Changing direction means innovating. It means looking at how you can better meet the wants of your customers, and how you can meet these while simultaneously driving up profits and margins. In essence, it means changing what you provide to your customer in some way.

Analysts say that Domino’s is leading its peers in the use of technology. Last year it launched voice ordering on its mobile app – the first pizza chain to do so. As mentioned earlier, it also innovatively manages its orders in-store. These things enhance the customer experience, improve the overall impression of the brand and allow the stores to function more efficiently.

The lesson: Crucial to every turnaround strategy in today’s world is a rethink around technology. Better use of technology can allow for greater customer experiences and improve your company’s economies of scale. Will redeploying technology take time, expense and effort? Yes. Will it be worth your while if it’s done right? Absolutely.

A tired old brand with flagging sales and plenty of well-established competition was able to reinvent itself by incorporating these three things into its turnaround strategy. If your company needs help implementing the same ideas into your own turnaround strategy, speak to The Finance Team. Our experienced, insightful strategists can help your company successfully identify how to have your own “Domino’s” effect and find the success you are seeking.

turnaround strategy
How to start and build businesses - Podcast 25 May
Louise Bothma
© 2022 The Finance Team Group (Pty) Ltd. All Rights Reserved.
× How can I help you?