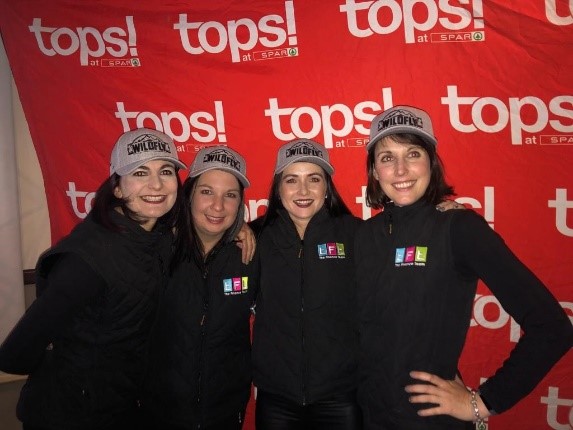 2019 has seen South Africa’s women breaking boundaries left, right and centre – from female pilots to DJs to seats of power in government to our national athletes.

Women are breaking into spaces and industries that were previously considered ‘boy’s clubs’ and this is just the beginning! The latest all-female troupe to break the mold in Mzansi is the Women in Waders. The fly-fishing quartet is sponsored by The Finance Team and the four incredible women who make up the team are ready to make waves (literally and figuratively!) at this year’s TOPS Corporate Trophy Challenge.

The Challenge is entering its 18th year but 2019 will be the first time that a team made up entirely of women will compete in the finals which take place at the Wildfly Waters in the KZN Midlands. Even more fitting, the Women in Waders will be competing at the closing event which takes place on the last weekend of Women’s Month where they will be hoping to bring the trophy home.

They won’t have to travel too far – all four fisherwomen hail from KZN and the team’s captain, Roxanne Stegen, will be keen to make use of their homeground advantage. Revealing their tactics for the finals, Roxanne said, “At the finals, I’ll be more strategic around dam allocation. As opposed to the first leg of the competition which we left to lady luck, I will allocate dams based on knowledge and fishing style preference of each team member. Good knowledge of all the waters in the area is a unique challenge in its own right”.

The Finance Team also beamed with pride at the prospect of an all-female team making history at this year’s Corporate Trophy Challenge. Their director, Grant Robson, said “The TOPS @ Spar Corporate Trophy Challenge is arguably the most prestigious freshwater fly fishing festival held in South Africa and it has been dominated by male competitors since its inception.” He added, “We are so proud of our team for securing their place in the finals and we back them all the way,”.

We’ll be keeping up with the Women in Waders as they make history from the 22nd of August to the 25th of August in the KZN Midlands.

Which other women have inspired you to push the boundaries during Women’s Month 2019?

The Woman in Waders make Waves

Fly fishing is not for the faint hearted – early, chilly mornings is one of the easier aspects to this intricate sport. South Africa is an avid playing ground when it comes to freshwater fly fishing, with many individuals and teams having been selected to represent South Africa both internationally and locally. There are many competitions, both individual and team events, occurring across South Africa. One of the most well-known group competitions is that of the Tops Corporate Trophy Challenge.

The Tops Corporate Challenge has been the most prestigious Fly Fishing event in South Africa for the last 18 years, with each year becoming more thrilling and competitive than the prior. This year, over 240 anglers made their way to Wildfly Waters, Natal Midlands, where the qualifiers for this competition commences. Teams battle it out over three legs, with the top five teams of each leg progressing to the finals. This year The Women in Waders, proudly sponsored by The Finance Team, have been the first women-only fly fishing team to have made it to the corporate finals in its 18 years of existence. These four avid fly fishers did not let the fear of this male-dominated sport get in the way of their vision to be victorious.

Over the weekend of the 22nd– 25th August, the ladies gave it their all at the finals of the corporate challenge. Tough conditions were eminent and the ladies fished their hearts out. They went on to finish 9th overall– an amazing achievement for the team and prestigious representation for all women in the sport.

The Women In Waders, proudly sponsored by The Finance Team, seen at the finals of the Tops Corporate Challenge. The WIW team: Roxanne Stegen (captain), Bridgette Stegen, Sindi-Leigh McBain and Lyndall Blaikie.

We asked team captain Roxanne to answer some questions around the challenge on behalf of the WIW:

Hahaha I’m not one for regrets. I’d do it all over again… I’d prefer to look forward where our eye on the prize is top 5 next time!

Through the buildup we’ve enjoyed enormous coverage as “The Finance Team – Woman in Waders”, as such propelling our brand in collaboration with The Finance Team and beliefs that we’ve inspired a few other woman to take up fly-fishing as a recreational past time and step out of one’s comfort zone. An excellent example is a recent comment from a woman on one of the Facebook promotions who wrote “#goals” – awe thank you – it’s what keeps us going. Perhaps more tangibly I believe the sponsorship allowed us ladies to simply go out have fun and fish without any “financial burden” or pressure.

There was one other woman in the finals, legendary Louise Steenkamp who fished with her male counterparts as a team. Must be said she was the Top Dog in her team!

If the outdoors and idea of fly-fishing appeals to you, there’s no need to know it all.  Simply start slowly, join our Facebook Page Woman in Waders SA, follow us on Instagram, come join in on a ladies clinic, join a fishing club, buy second hand gear and get out there… we look forward to joining you!

As we look back, The Finance Team is proud to have been backing The Women In Waders throughout the entirety of the Tops Corporate Challenge from the beginning. The ladies can be very proud of the amazing end results they received in this tough and enduring challenge!

Share on FacebookShare on TwitterShare on Linkedin
What’s The Worst That Can Happen With A Disgruntled Silent Shareholder?
3 Important Ways To Foster A Successful Future For Your Business
© 2022 The Finance Team Group (Pty) Ltd. All Rights Reserved.
× How can I help you?