Tito Mboweni Caught Between A Rock And Many Hard Places - The Finance Team
Call us on  0861 007 917  info@thefinanceteam.co.za 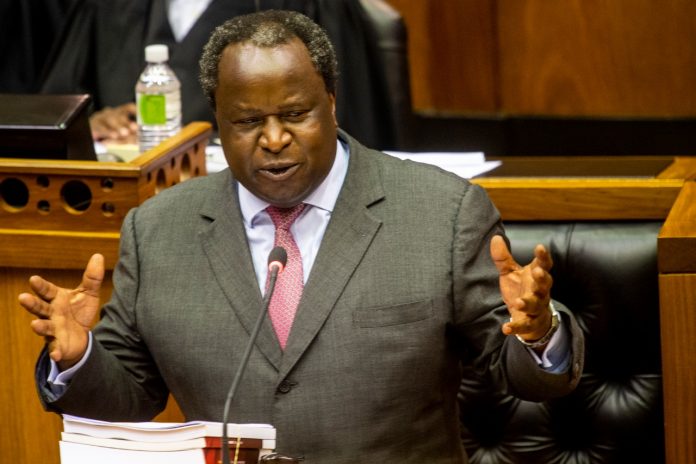 THE BREVITY of Finance Minister Tito Mboweni’s Wednesday supplementary budget speech gives insight into the amount of fiscal wiggle room he currently has at his disposal: very, very little.

The national debt to the GDP ratio has risen by over 15 percentage points since the last estimate, from 65.6% to 81.8%; South Africa’s unemployment rate tipped 30% in the first three months of the year; tax collection is disastrously low; and the Gross Domestic Product is expected to contract by 7.2% this year.

That constitutes the largest contraction in almost 90 years, and it could be significantly greater, depending on the effects of Covid-19.

It’s safe to say that Mboweni is between a rock and many, many hard places.

THE DEBT AND TAX CRISES

Gross tax revenue collected during the first two months of 2020/21 was R142-billion, compared to treasury’s initial forecast of R177.3-billion.

As a consequence, gross tax revenue for the current fiscal year is revised down from R1.43-trillion to R1.12-trillion.

“That means that we expect to miss our tax target for this year by over R300-billion,” said Mboweni.

Thanks to these low collection figures, extra government spending around COVID-19, and a massive economic slowdown, South Africa’s debt level has seen a steep, unexpected increase.

Current forecasts are that it will reach close to R4-trillion this year, or 81.8% of our GDP.

“Debt is our weakness,” said the minister in his speech.

“We have accumulated far too much debt; this downturn will add more. This year, out of every rand that we pay in tax, 21 cents goes to paying the interest on our past debts. This indebtedness condemns us to ever higher interest rates.”

While acknowledging the current debt hole, Mboweni said that the government would need to borrow more in order to stay functional.

“Without external support, these borrowings will almost entirely consume all of our annual domestic saving, leaving no scope for investment or borrowing by anyone else,” said Mboweni.

“For this reason, we need to access new sources of funding. Government intends to borrow about US$7-billion from international finance institutions to support the pandemic response. We must make no mistake, these are still borrowings. They are not a source of revenue. They must be paid back.”

However, he did not give any updates on the roughly R4-billion loan that he previously indicated was up for grabs by the International Monetary Fund loan, or the funding that the country planned to apply for from the World Bank.

In addition, we don’t know many details about the US$-1billion loan that has been approved by the New Development Bank (formerly known as the BRICS bank).

The government has come under fire from the likes of the Economic Freedom Fighters (EFF) for considering such funding.

“The IMF and World Bank loans come with restrictive conditions, which will deprive South Africa of its fiscal and monetary policy in the future,” said the EFF in an April statement.

However, many analysts have said that the country has little choice other than to accept the funding on offer.

While trying desperately to shore up debts, the government has had no choice but to spend significant amounts of money dealing with the health, social and economic implications of the COVID-19 virus.

The supplementary budget puts aside R21.5-billion for COVID-related spending on things such as hospital beds and testing; an additional R25.5-billion for a Special Relief of Distress grant for the poor; and R23-billion has already been paid out by the Unemployment Insurance Fund (UIF) to employees affected by COVID-related company closures.

R19.6-billion will be added to the existing R6-billion put aside this year for the Presidential Youth Employment Intervention, rolled out earlier this year.

The Economic Support Package sets aside R100-billion “for a multi-year, comprehensive response to our jobs emergency,” said the minister.

In addition, R200-billion has been set aside for the COVID-19 loan guarantees scheme.

Overall, the government’s COVID-19 fiscal package identifies R500-billion in economic relief, “one of the largest economic response packages in the developing world”, said the minister.

“In addition, the Reserve Bank has reduced interest rates and provided additional support to the bond market, financial-sector regulations have been eased to support the flow of credit to households and businesses, and commercial banks have introduced temporary payment holidays,” reads the detail.

February’s 2020 budget speech faced an already very tough economic climate, and yet did well to address many of the hot potatoes faced by the Treasury at the time.

Whilst it must be conceded that the economic circumstances have spiralled significantly since then, it’s difficult not to compare how comparatively little this supplementary speech did to address many of the bugbears of the electorate.

The annual budget speech made bold assertions around slashing the public wage bill by R160.2-billion over the next three years, but this topic was almost a non-item on Wednesday’s agenda. Mboweni hinted at the political deadlock the government faces with the unions, and said that labour minister Zenzo Mchunu is negotiating with labour partners to find a balanced solution that sets compensation at an appropriate, affordable and fair level. “We wish him well,” said Mboweni; the simplicity of the statement belying the enormous complexity of the task.

With Eskom hinting earlier this week that load-shedding could be back on the cards, and the current restructuring of the power utility lumbering under R43-billion in debt, South Africans were looking forward to more details about expenditure here, but received little. “Provisional allocations to Eskom were made on the understanding that Government’s Electricity Roadmap would be implemented. Progress is slow,” said the Minister.

“Eskom will need to show progress in meeting the milestones as laid down in the Roadmap. This is non‐negotiable.”

The ongoing question about South African Airways continues to hang in the air as well. In fact, there was very little mention of state-owned entities overall, other than an announcement that the government would be allocating R3-billion to recapitalise the Land Bank.

“This Bank holds 29% of South Africa’s agricultural debt,” said the Minister. “The National Treasury is supporting the Land Bank find a solution to its default and craft a long‐term restructuring plan.”

One arguably bold undertaking was made by the minister, likely in an effort to appease ratings agencies and foreign investors.

The minister stated that the government undertakes to stabilise the debt to GDP ratio at 87.4% by 2023/24.

When the South African debt-to-GDP ratio hovered around 60%, analysts highlighted that the main issue was not that South Africa’s debt to GDP ratio was unacceptably high – being comparable with some other emerging markets – but that there was no demonstrable pathway to drive down the debt over the medium term.

The minister’s announcement curtailed some analysts’ speculations that it could continue to rise every year over the decade.

Investec’s chief economist Annabel Bishop said, however, that this would not be enough to put the country into positive ratings territory.

“While South Africa projecting a peaking, and hence stabilisation of debt is positive, it will not be enough to avoid South Africa being pushed into the single B credit rating categories over the course of the next few years, with 87.4% still a huge figure for an emerging market’s government debt, and one which does not tally with debt sustainability.”

AN OMEN OF THINGS TO COME?

The minister did not mince his words in spelling out the ominousness of South Africa’s current situation. In particular, he warned about the devastating effect of a sovereign debt crisis.

“The results are devastating,” said the minister.

“We are still some way from that. But if we do not act now, we will shortly get there.”

Mboweni said that, in order to avoid this, the Medium-Term Expenditure Framework process will be guided by the principles of zero‐based budgeting.

“This means that we will try to reduce all expenditure that we thought we can no longer afford,” he said.

“After all, we are not as rich as we were ten years ago.”

His words may be an effort to prepare the public for some very tough news in the budgets to follow.

These would have been complex to implement in the middle of a tax year, she said, so “it’s not surprising that we did not hear anything today for that reason. However, tax increases are necessary to stabilise debt, and we are likely to see an increase in personal income taxes announced in the February 2021 budget speech.”

Political opponents have been highly critical of Mboweni’s speech.

The Democratic Alliance’s federal leader John Steenhuisen tweeted that it was a “speech that could have been a WhatsApp.”

Founder of The People’s Dialogue Herman Mashaba said that it was “an insult to the South African people, who are enduring the hardships of declining household income.”

In Mashaba’s opinion, the Minister’s greatest failure “lies in the unwillingness to make the necessary budget cuts within government to reduce the need for international loans and allow for real measures to stimulate our economy.”

Mashaba said that in his former role of mayor of Johannesburg, “we were able to cut-back on non-essential expenditure to the tune of R2 billion. These funds were re-directed towards infrastructure and pro-poor priorities. If this can be done in Johannesburg, it can be done nationally with vastly larger sums being freed up.”

(Compiled by Inside Politics staff)

Share on FacebookShare on TwitterShare on Linkedin
What is the role of the modern day finance manager?
ThinkLead #2020DAL #GlobalLeadershipConversation
© 2020 The Finance Team Group (Pty) Ltd. All Rights Reserved.